A school in Bodh Gaya – Sponsor a child in India 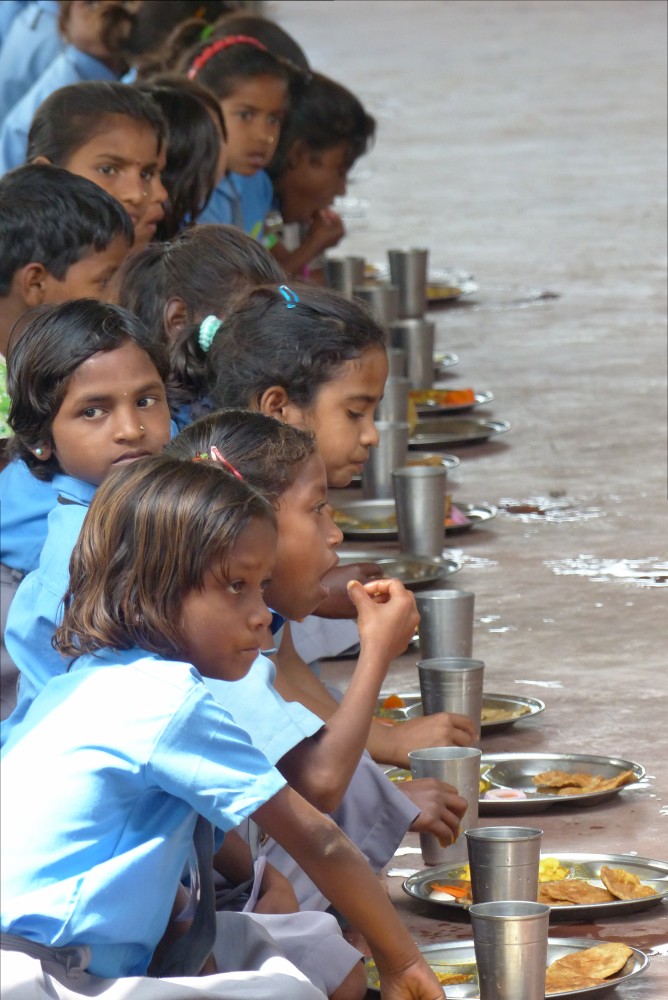 “A school in Bodh Gaya” started in 2002 as a project. A young Indian guy, Rajesh Verma, aged 23 at the time, worker in a hotel in Bodh Gaya (Bihar State, India), the place where the Buddha realized awakening, had a passionate wish to create a school that would provide free education for the poor children of that area. The motivation of that young Indian man comes from the fact that he himself could go to school during only three years, his parents being unable to pay for his scholarship; he even sold his blood to make his brother continue studies. 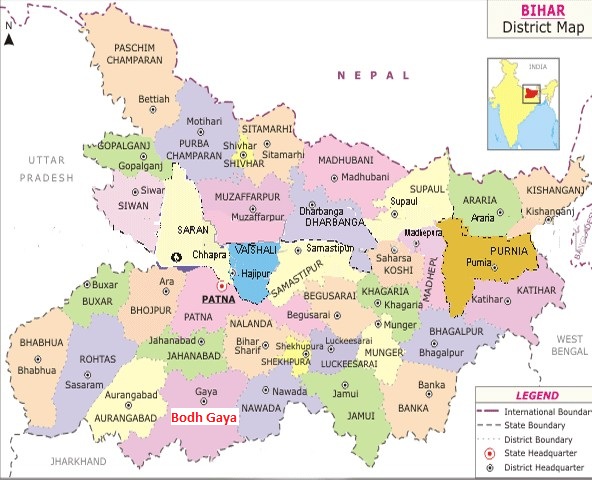 Bihar state, with its capital Patna, located in the East of the country, between Varanasi (Benares) and Kolkata (Calcutta), is one of the poorest states of India and consists of 80 million inhabitants. If Bodh Gaya witnesses the splendor of Buddhism and the devotion of the pilgrims by the fast construction of numerous temples and monasteries, the surrounding villages are extremely poor, with no water or electricity, no school or health center, most of the people being agricultural laborers, living essentially on rice growing and livestock farming. They are “untouchables”, victim of the customs that endure despite the official repeal of the system of castes since the independence around sixty years ago.

Rajesh talks with the tourists coming to Bodh Gaya, he makes friend with a French guy from Strasbourg and tells him about his dream: create a school for poor children. There is a state school, but the teacher gives a tip to the authorities and doesn’t come. The French guy comes again with two of his friends, and the idea of an organization based on the sponsoring of children is gaining ground. Back in France, one of those visitors suggests his friends to contribute, another one starts to create and administrate the project: the French organization “A school in Bodh Gaya” starts collecting funds that are directly transferred to the Indian organization THES (“Tara Helping Education Society Foundation”) that Rajesh created in India at the same time. 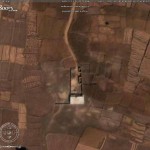 March 2003: Rajesh is looking for a cheap plot of land near Pathra. He selects it out of villages, amidst fields, close to 4 villages from which the children might come on foot. The first duty of Rajesh is to select the poor children who wish to go to school, and take their picture.

April 2003: A French welfare organization, according to the law of 1901, is created, and called “A school in Bodh Gaya”, the statutes being published legally in the “Journal Officiel” of the French Republic. 48 persons are willing to donate 20€/month, and they receive the photograph of the child they are going to sponsor.

July 2003: Rajesh follows a training course in Pondichery (state of Tamil Nadu, south east of India) under the NGO “Volontariat”.

September 2003: The collected funds enable us to start the building of that school in India. Rajesh Verma leaves his job at the hotel, becomes the director of the school and manages the works. Bricks are offered by Rajesh’s uncle, a loan is taken out to finish the building (it ends by February 2005). A professional accountant controls regularly the invoices and accounts.

February 2004: The school consists in a single storey-building with 4 classrooms, a kitchen, an office, the bathroom and a surrounding wall. The finishing works (painting, water-proof quality) are done, the equipment of the kitchen is installed. Four teachers (2 men, 2 women), one cook and one security guard are recruited, while the furniture and the school books are purchased, the school uniforms are made, etc… 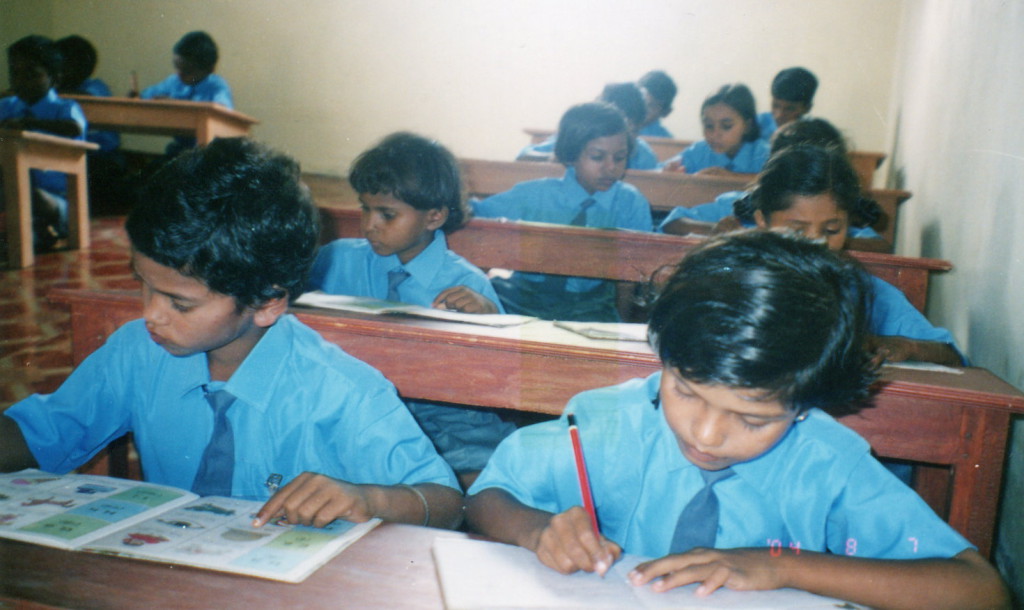 May 2004: The school opens on May 2nd 2004, with the presence of some sponsors. The speeches of Rajesh, of the treasurer of the French organization and of the doctor, take place before the oath taken by the teachers. Ananda Lakshmi, an Indian woman from Pondichery that we met in 2003, designed the oath, through which the teachers promise to respect a code of ethics, especially not to follow the system of castes. Then meals and sweets were given to the children and their families.

July 2004: The school consists of 74 children and 4 teachers. The biggest children are in class III (in India classes run from I to X).

The cook prepares one meal a day for the children (it is often the only meal of their day); the cook is very attentive to the freshness of the food, the meals are balanced, they change every day on a weekly program, and are plentiful; children may take another helping unlimited. The big children are helpful to the younger ones. 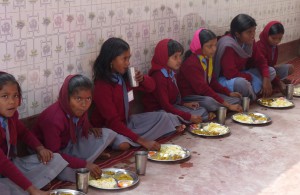 The hairdresser came to the school and 25 children who needed have got a haircut. A doctor comes every week for half a day, to examine the children; he treats them for minor skin problems and diverse infections due to a lack of hygiene. They simply have a low immunity, nothing more. After a few months the health of the children has already improved. Then the doctor comes only once a month, and his assistant continues to come one day out of two, to follow the treatments. Thanks to a donation a car is bought, to supply the food and transport the teachers.

October 2004: We had to let go two teachers who were discriminating children regarding their caste; they expressed their disagreement with the spirit of the school. Rajesh found two supply teachers.

December 2004: Each sponsor gets a greeting card, written by the teacher, with a drawing made by the child. 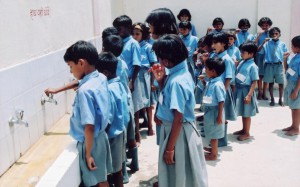 March 2005: The children moved to the upper class, and at that occasion they received new books and new exercise books.

After one year, 108 children are sponsored, they come to school regularly, they learn to read and to write, but also to wash their hands and teeth.
September 2005: There is a big meeting with the parents of the children; Rajesh explains to them that they should give time to their children, to read and write at home. 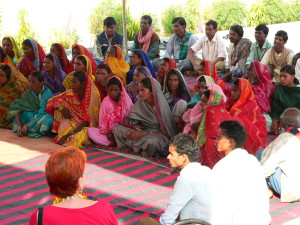 October 2005: A plot of land adjacent to the school has been bought, partly thanks to a donation. The accounts and invoices have been controlled in great detail by a state organization; they are well kept and “A school in Bodh Gaya” stays without any profit: therefore it is free from taxes on income and it receives a very important certificate, leading to an official recognizing by the government. The check must be renewed every year.

February 2006: A local deputy has visited the school; he has been very interested, and promises a road with tarmac to get to the school. The newly bought plot of land is fenced in, a new floor is under construction above the building with the classrooms. 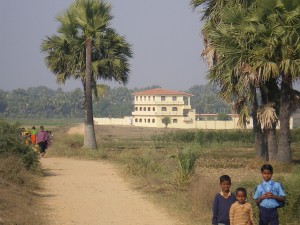 May 2006: 155 children are sponsored. The 30 oldest of them subscribe to take the federal examination of the 5th class by the beginning of 2007. Two youngsters leave the school for a work. One young girl is seriously burnt at her thighs by a light (she is considered, by her family, as an unnecessary mouth to feed…)

September 2006: The floor is finished and enables us to lighten the classes of the youngest children and open two new classes. The director provides the equipment of the schoolyard: a slide and swings. 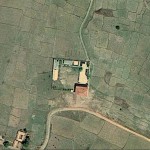 A grant received from an official French state organization enables us to extend the school: a covered playground, a new kitchen entirely tiled, a new office more functional for the director and his assistant, the surrounding wall and a second floor of classrooms are built. Adjacent plots of land are bought, the second building of classrooms is built in 2012. 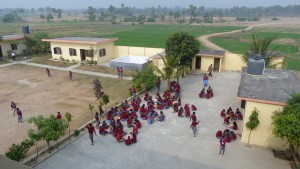 The older pupils, who left for other schools, passed their local exams. The fame of our school is increasing, it is said in the local newspaper. In March 2009, our school is at first rank, and gets a certificate from the Ministry of Education of Bihar State. In 2012, 9 pupils of the upper class passed the official exams in the city: 5 of them are the 1st and 4 are the 2nd in rank! 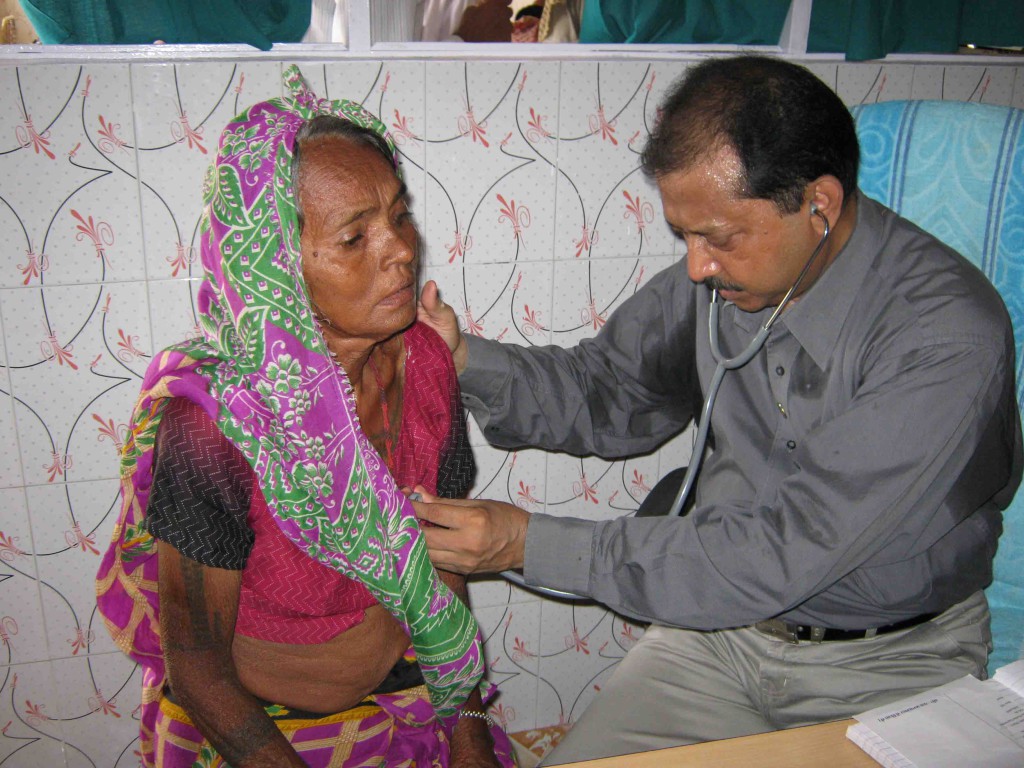 At the director’s instigation, the French Committee of our organization has decided to help also the poor people of the villages around; the decision changes our statutes. Rajesh indicates that a health center would be very useful, as well as a course of sewing for women. In February 2010 the construction of a building next to the school starts; it includes a health center and a room for the sewing-course for adults. It is isolated from the school by a fence and has its own gate, to avoid disturbing the classes. The “Tara Medical Center” and the “Tara Women Formation Center” are opened in June 2010: about 150 villagers attended the ceremony of opening.

September 2010: The health center is running every day from 8 a.m. to 4 p.m. except on Sunday. Everyday 40 to 50 people come to the surgery hours, among them many children, mostly with fever or coughing problems.

There is a very high number of candidates for the sewing-course. It runs from Monday to Saturday, from 9 a.m. to 4 p.m., and is followed by 45 women in 3 groups. Each group is busy 2 hours/day, during 6 months. They contribute with 10 rupees/month, in order to be able to pay the course independently from their husband. 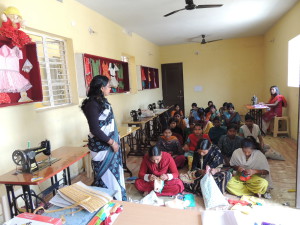 April 2012: On the meeting with parents, Rajesh reminded them that this is a non-profit school, and that all teachers have a social vision on it. Then the father of a pupil, and a “saddhu” started talking, saying that they could never imagine having a health center and a school around here. They are very happy for that, and confirm that the school compares favorably with the very expensive local private school.

September 2012: The oldest pupils follow the course of computer science, given by one of the teachers of the school, using 4 computers supplied by the deputy; the English course has been strengthened in order to prepare them! It was necessary to get a generator to supply the failure of electricity at the school, and buy more computers!

June 2014: One of our pupils, Puja, deserved a special care, due to a heart deficiency; the donations of the sponsors enabled to pay more medical investigations: no need for surgery, Puja is now treated by drugs. 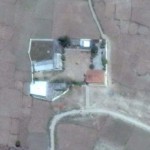 When the school year ends, some students leave the school; some girls get married but still come to school; boys get work, they earn more than their parents so they can help them; one boy is security guard, another one is doing construction, some are shop employees; one boy has been trained to be a carpenter, and left for Sri-Lanka: he obtained a passport thanks to the certificate he received in terminal Class X ; the salary he gets will highly improve the situation of his family, which is very poor. One girl has taken responsibilities in her village; some others continue their education with a governmental scholarship, one boy starts to study medicine. 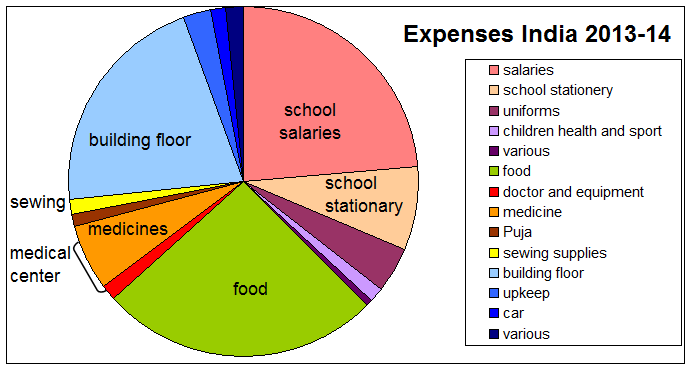 396 children have come to the school, and 307 still come today. The classes run from nursery school to Class X. There are 30 employees: teachers, director and assistant, house maids, security ward, medical assistants, sewing teacher, etc… There are now 20 classrooms. The Medical Center and the sewing courses are fully functioning.